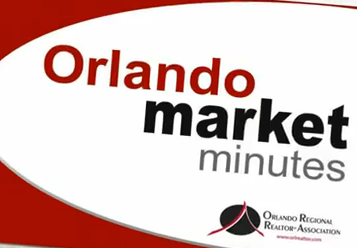 The Orlando Regional Realtor Association (ORRA) just released the Orlando Housing Market Report for August of 2013 and it is full of positive news for the local market.

According to ORRA Chairman Steve Merchant, the increase in median price is directly related to the continued domination of higher priced "normal" sales over foreclosures and short sales, which have controlled the market over the last couple of years. Normal transactions made up 67percent of total homes sales in August 2013, while short sales and foreclosures only accounted for 33 percent of the total sales pie. This is opposed to August 2012 when short sales and foreclosures accounted for 52 percent of sales.  This is a great indication of a much healthier market than when distressed sales ruled the closing table.

In August 2013, homes spent an average of 67 days before coming under contract and sold for 97 percent of listing price. Last August those numbers were 79 days and 96 percent respectively.

The average interest rate paid by homebuyers in August was 4.64 percent as opposed to 3,78 percent for the same period last year.  While interest rates have been on the rise, they are still low by historical standards.  This, as well as affordable home prices, have brought many potential homebuyers off the sidelines and into the action.

All in all, these statistics support a continued positive momentum in the Central Florida housing market. Potential buyers looking to take advantage of historically low rates, affordable housing prices and financing becoming easier should continue to drive the market in a positive direction. In addition, recent reports by Realtytrac show that more homeowner's now have equity and are in a position to sell, which should only support the momentum in the local real estate market.